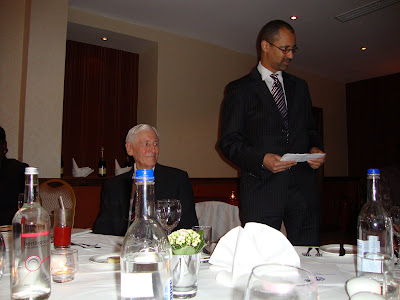 A couple of weeks ago I hosted a dinner for the Trustees and friends of the African Gifted Foundation. The charity is really beginning to take shape now and I am excited about the coming year.

The dinner was held in honour of our guest from Uganda, Professor Paul Mugambi, President of the Uganda National Academy of Science and Vice-Chancellor of Nkumba University, Uganda. Prof Mugambi from Uganda will be joining our Board of Trustees as will Andrew Alli, CEO of the Nigeria-based $Bn fund Africa Finance Corporation and Lord Avebury, the renowned human rights peer and a respected member of the House of Lords.

We are also delighted that the eminent South African campaigner, academic and businesswoman, Dr Ramphele has agreed to be Patron of the Foundation. Amongst many other achievements, Dr Ramphele was a Managing Director of the World Bank and Vice-Chancellor of University of Cape Town.

So, the Foundation, which will be pan-African from the start, has senior support from South, East and West Africa as well as strong UK and international connections.

Over the past couple of months we have worked through the process of setting up and registering the charity in the UK, appointing bankers, auditors and lawyers and we heard last week that the Charities Commision has just issued us with our charity number, so we are now formally established as a UK registered charity.

In 12 months time the African Gifted Foundation will hold its first 2-week Academy residential session for children gifted in maths and IT from across Africa and we are now working towards bring together the young people at a leading University in Africa, with experts from Africa and the UK. We are working out the programme and raising the funds right now. If you can think of anyone I should be talking to about becoming a donor please let me know.

Perhaps the most exciting thing that happened last week though was an unexpected package that arrived in the post via a very talented author that I met recently. Apparently a number of schools in Botswana have heard about the Foundation spontaneously assembled a dossier containing a list of their most academically gifted young people, complete with school reports, identity documents, achievement certificates and letters of recommendation. This is before we have even gone out there to tell people what we are doing! The achievments of these young African gifted children are very impressive, despite the odds some of them face, and I am certain that there will be no shortage of extremely bright young people for the Foundation to work with.
at January 31, 2010

I am so glad to hear how well the AGF project is coming along. It really is a fantastic thing you are doing and I wish you every success in the year ahead.

I am afraid I have no advice on who you should be talking to in fact I have no idea how you have even done all this! It is fantastic what you have already acheived. I helped organise a charity ball and only just managed to do that let alone what you have done. Well done and the best of luck to those talented children!

Can you see me?